Grow 2019: 5 Disruptive Technologies for Agriculture That Are Ready, Now

“One-third of all the food in the world is wasted, costing $1.2 trillion annually”

One-third of all the food in the world is wasted, costing $1.2 trillion annually. Food fraud costs a further $40 billion a year – who can forget the horse meat scandal, milk powder contaminated with melamine, and by the way, most olive oil isn't olive oil.

The technology can determine invisible qualities like the freshness of fish (or even species, post-filetting), and detect the presence of foreign objects (needles in strawberries, anyone?).

In New Zealand, it could prove most useful for the avocado industry. Hyperspectral imaging can be used on a conveyor belt to assess the dry matter in avocadoes (a proxy for ripeness), and allow sorting into batches based on time-to-ripen – not only giving industry data about quality at the point of processing, but enabling an accurate predication about quality when it reaches consumers.

New Zealand is a potential hub for the technology; some research work has been done here, but it hasn't yet proliferated into supply chain.

What's next for this tech?

Hyperspectral cameras used to be the size of a room and cost $100,000+. The size and price have now dropped to the point where a hyperspectral camera for a smart phone is in development. Within 3 years this technology will be in consumers hands, says Abi, and it will be almost as revolutionary as GPS.

For industry, sensor-based data can be add quality verification to a blockchain (or similar) giving supply chain traceability.

David Davies, founder of EscaVox and AgUnity, was awarded Global Agripreneur of the Year 2018 for his work on tech to fix issues in the fresh food supply chain.

AgUnity is a philanthropic company that uses blockchain technology to increase farmer income in developing countries by up to 3x. The technology is in use already: A customer at a café in Germany can scan their receipt to track their coffee back to the farmer who grew it in Ethiopia – and send them a message or pay them a tip.

It’s a great company but David is here to talk about EscaVox, his commercial venture that uses blockchain-adjacent technology to track food through the supply chain to supermarkets. It’s recently been successfully piloted in 250,000 pallets ($1 billion of produce) with Woolworths in Australia.

EscaVox technology tracks location and temperature of produce all the way through the supply chain, enabling the identification of temperature variations that decrease shelf life. Here's the info it gives. Its ‘internet of things' based tech is in a device that’s placed in a pallet of produce at source (the scale is shrinking so that it will soon be embedded in stickers on cartons).

The platform is designed to include other data (such as hyperspectral imaging, see above), and allow growers and farmers using good process and practices convey that to the end consumer.

The biggest issue for EscaVox to solve is the massive amount of data that will be generated and shared when tracking produce to market – for Woolworths Australia alone, a billion supply chain tracks a year are required.

That’s why EscaVox doesn’t record data on a blockchain, but operates in a similar way – it’s a distributed data store that uses private key encryption and has no monopoly control. Blockchain is overkill for this type of solution, says David.

He’s also passionate that customers should own their own data. “People creating monopolies on data is very dangerous.” EscaVox is an open data network that doesn’t own or control the data.

“It's a game changer and a wake-up call”

We're living in the age of gene-edited babies and impossible burgers, says Raymond McCauley, principal at Exponential Biosciences in the US, a consultancy working in biotechnology, bioinformatics (‘big data' science), genomics and nanotechnology.

Raymond was a pioneer of consumer genetics tests, and he's got some thoughts to share about cellular agriculture – or, as you may know it, fake meat.

Here's an incredibly simplified version of how you do it: Take a small biopsy, extract myosatellite cells, add animal-free growth serum, grow cells on scaffold to form myofibres which band together to form muscle.

The same technology can make meat with healthier fats, milk without lactose, eggs without cholesterol – and aged whiskey overnight.

Our Land and Water wonders about the implications for the New Zealand wine industry – and its potential imitators.

Will traditional agriculture be replaced by cellular agriculture? No, says Raymond, we’re going to need everything we’ve got to get through the next 30 years.

Tim Cannon, founder of EmbediVet, has a device implanted under the skin of his forearm that takes his temperature every 5 minutes. It's linked to the thermostat in his house so that when he gets cold, his house warms up.

“Safe for cows, tested on humans” is his slogan for EmbediVet, the implantable health tracker for cattle now just 6 months from a commercial pilot with 2 of the largest beef producers in Australia, with funding through Meat and Livestock Australia.

The EmbediVet device is implanted in a cow’s neck. and monitors the cow’s activity levels, heart rate over time, temperature, oxygen in the blood – it can even text message a farmer to tell them a cow has had 30 minutes of labour activity and needs checking.

It costs just $5-10 per reusable chip (they're reclaimed at the abattoir) and an applicator similar to a piercing gun is in development, so that chips can be implanted by a farm worker rather than a vet.

While “Safe for cows, tested on humans” is his slogan for now, the ultimate goal is for the technology to be widely adopted by humans to mitigate preventable diseases: “Safe for humans, tested on cows.” 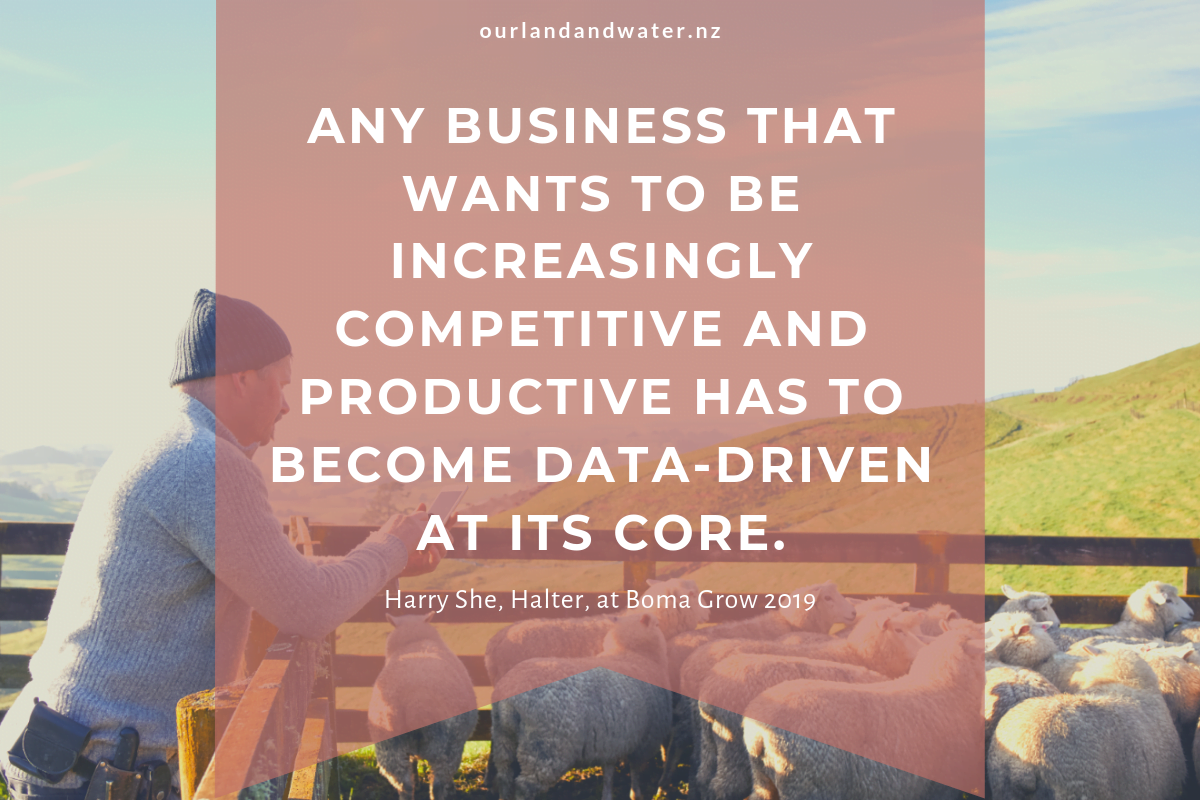 When adopting new technology for farms, what do you think is most important for the farmer?
41% of the audience votes for reducing labour workload

Meanwhile, New Zealand company Halter has developed an external wearable for cattle – a solar-powered cow collar that enables a farmers to remotely control and guide a cow around the farm.

Harry She, head of data science at Halter, tells us the company has its first customer and the collars are being rolled very shortly. Dairy farming is the focus because it’s the most labour-intensive of all farming systems, he says.

The collar works via Pavlovian conditioning, using speakers and vibration to make the association with fresh pasture.

The app lets a farmer create a feeding schedule for their cows, can generate automatic breaks based on troughs in paddock, and allows farmers to precisely allocate grass per break.

It also provides virtual fencing, protecting waterways, and supports farmer mental health by allowing them to spend more time with their family.

The collar also has health-tracker attributes: it can detect heat, lameness and general wellbeing. Cows are stoic prey animals that hide signs of lameness until its severe, Harry says, and the collar can detect lameness  before it becomes a big problem by identifying longer lying time and shorter grazing time.

This is something Raymond McCauley also mentioned: The very presence of humans (predators) can make cows nervous, and decrease milk yields. He mentioned another technology from Cainthus, which uses cheap webcams to monitor livestock. Using facial recognition software, even these cheap cameras can track eating, gait analysis and predict health problems better than humans.